Sophie Schillaci of “Entertainment Tonight” joins CBSN with more on the passing of Tom Petty. The musician was 66 years old.

UPDATE: According to TMZ, Petty was put on life support at UCLA Santa Monica Hospital, then taken off, since his family has a do not resuscitate (DNR) order in place. At this time, Petty is still alive, but is not expected to live through the day, TMZ reports.

Tom Petty, age 66, was reportedly found unresponsive and not breathing at his home in California Sunday night, October 1, 2017 and rushed to UCLA Santa Monica Hospital, after Los Angeles County Fire Department paramedics were dispatched about 10:45 p.m. Petty was reportedly taken off of life support after he was found unconscious in his California home on Sunday. Petty regained a pulse, but an EEG test showed no brain activity. Petty is reported dead of a heart attack on Monday, October 2, 2017.

Florida native Tom Petty rose to fame in the ‘70s, leading top rock band Tom Petty and the Heartbreakers. Petty has been on tour to celebrate the 40th anniversary of his band. Last week, the band completed three sold-out shows at the Hollywood Bowl.

Tom Petty sold more than 80 million records worldwide, making him one of the best-selling music artists of all time. In 2002, Petty was inducted into the Rock and Roll Hall of Fame.

Thomas Petty was born and raised in Gainesville, Florida. At age of 17, Petty dropped out of Gainesville High School to join the band Mudcrutch.

Music video by Tom Petty And The Heartbreakers performing Runnin’ Down A Dream. (C) 1989 Geffen Records 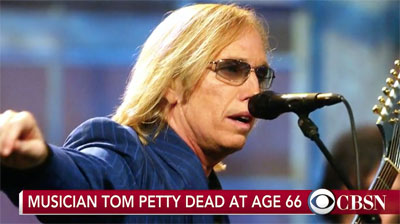 According to a Facebook Post, Lewis died in his Chicago home. Lewis was a three-time Grammy winner, and NEA Jazz Master. His 1965 hit “The In Crowd” was an international pop crossover hit. YouTube Tips […]